Number 3 in a series of audio and video presentations curated by by EarRelevant’s publisher and principal writer Mark Gresham as part of his “Composer’s Notebook.” Several of our writers are also composers, and in this process we’d like to introduce you to some of their music during this time in which we are absent live concerts.

Based in Lugano, Switzerland, composer/pianist Giorgio Koukl began writing for EarRelevant in October of 2019, and is currently our sole writer in Europe. As a pianist, he is known best for hisrecodings of the complete solo piano works of Bohuslav Martinů, along with all of that composer’s piano concertos and several discs of song. No surprise: Koukl was born in Prague and came to know and be influenced the legendary Czech pianist Rudolf Firkušný, who was a friend and champion of Martinů.

In addition, Koukl has recorded complete collections of solo piano music by compesers who are somewhat ignored in this century, such as Alexander Techerpnin, Ale4xandre Tansman, Arthur Vincent Lourié, Vítězslava Kaprálová, Witold Lutosławski, Alexandre Tansman, and most recently Tibor Harsányi. An astonishing number of the tracks are world premiere recordings.

What better way to introduce Giorgio Koukl’s compositions, we thought, than with one of his works for solo piano, recorded by the composer himself.

For Il messaggero, Koukl imagines “a vision of a messenger full of music running around the world to touch as many people as possible.” However, this piece should not be taken as program music in any sense. As with any successful courier, velocity is part of the recipe for success in the opening section. The contrapuntal voices spaced in wide intervals on the keyboard will tax a performer’s technique. The middle section epxrtesses quietude, eloquence, sadness in a dignified manner, while the sensuous quality of Koukl’s composing is evident in the final section. ■ 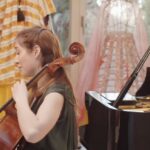 Review: An astonishing show of musical joy and skillfulness from Camille Thomas and Julien Brocal • 12 Apr 2021 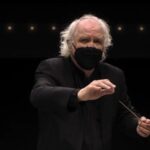 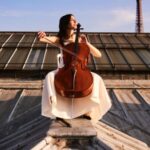 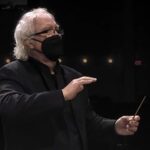