Nothing is like a live performance, of course, but when pandemic or simple distance says you can’t have that, video has become the closest simulacrum for most people these days, providing both visual and audio elements – with a not to the fact that excellent audio alone has a long history of doing well the job of delivering the aural part. One of the very real advantages of video video or audio deployed via internet, however, is that you don’t have to be there at a specific time. Yes, if you want the seeming “first experience” of live streaming, then be there, but typically videos without a ticketed gateway are available subsequently on public online platforms as “on demand” content. That’s good for demonstrable reason – to be shown shortly.
.
(Those of use who grew up in the days of old-fashioned broadcast television didn’t expect to see a replay until VCRs came about and made it possible. My nephew, by contrast, was a “VCR baby” and as a small child didn’t understand why you couldn’t rewind broadcast TV.)

There were three classical chamber music concerts involving Atlanta musicians being streamed this past weekend that I wanted to view. They all offered very well-played performances, but proved very different video experiences.

I watched the live stream on Saturday evening of the Vega String Quartet performing Beethoven’s String Quartets No. 12 (Op. 127) and No. 9 (Op. 59, No. 3) in which Vega violinist Jessica Shuang Wu, violist Yinzi Kong and cellist Guang Wang were joined by ASO concertmaster David Coucheron as guest 1st violin, standing in for violinist Elizabeth Fayette who has departed the ensemble, returning to New York to seek other opportunities. Presented by Emory Chamber Music Society of Atlanta, the concert was live-streamed from the Schwartz Center Virtual Stage but can still be viewed on demand there or more directly on Vimeo.

The best reason for capability to do on-demand replay of a live-streamed concert became evident here. I tuned via the Schwartz Center Virtual Stage maybe 15 minutes ahead of the scheduled stream-cast, keeping an eye on the countdown in the video window displayed on my screen: 5, 4, 3, 2… then a message that the program “hasn’t started yet.” Okay, if figured that it was just starting late. Fourteen minutes went by, and by that time I figured something was not right. I reloaded the page (re-entering my name and e-mail address again to gain access, and there was the video stream, most of the way through the Op. 127 Quartet.

I watched the remainder of the concert on the SCVS web page. When the concert was done, I went to the direct Vimeo link where the video had become available to watch again. That’s how I watched the complete first movement, which followed verbal introductory remarks. The Vimeo viewing actually felt better to me than the live stream. Thank goodness for replay.

The performance portion itself was shot a single camera — a single, mid-range group shot– with overhead mics. The overhead mics, out of camera view, delivered a rather full, robust and “present” sound, though almost too hot and inclined a little toward the bass end of the sonic spectrum. For example, the pizzicati in the cello part at one point brought forth a bit of snap that would not likely have been heard so much by a live audience in the hall with its natural acoustical compensation. But overall, the audio was rather good. My understanding from ECMSA artistic director William Ransom is that they expect to expand the number of cameras for their next concert, so the visual element of concerts will become more varied.

I was unable to view live another concert that Emory Chamber Music Society Of Atlanta presented on Friday at noon. It was the first of their new “Bach’s Lunch” series, concert co-presented with First Presbyterian Church of Atlanta, which provided the performance space and video production. Instead, I watched the video “on demand” on Wednesday night via the direct Livestream.com link, rather than the Concerts@First page – you can do either.

Despite the implications of the name, “Bach’s Lunch,” the music was entirely by Beethoven — part of ESMCA’s mission to complete a comprehensive survey of Beethoven’s violin and cello sonatas, piano sonatas, and string quartets. Violinist Helen Hwaya Kim and pianist Julie Coucheron were up first with the Violin Sonata No. 6 (op. 30 no. 1) then violinist Margeaux Maloney joined Coucheron to perform the Violin Sonata No. 4 (op. 23). To top off the concert, cellist Charae Krueger and pianist William Ransom, performed Beethoven’s Cello Sonata No. 1 (op. 5). 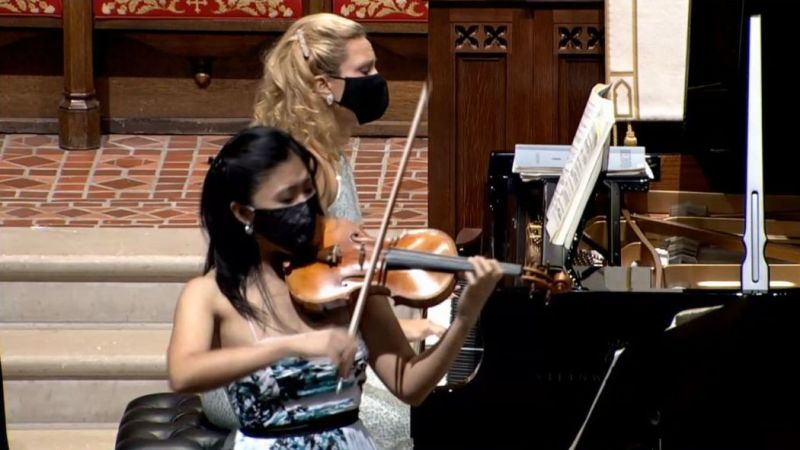 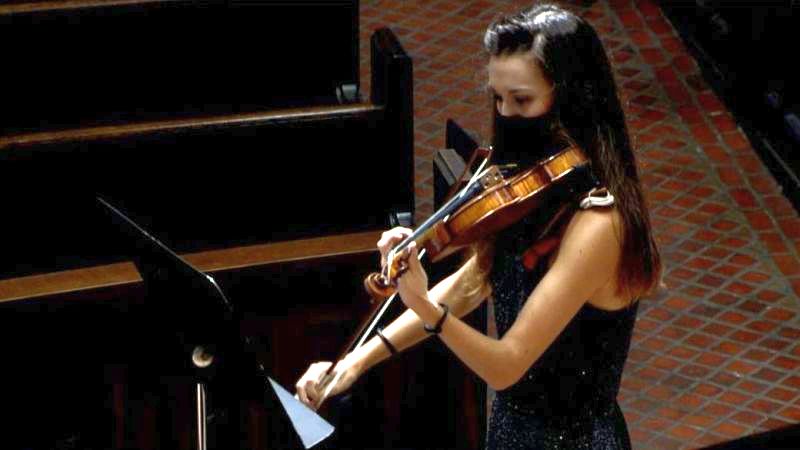 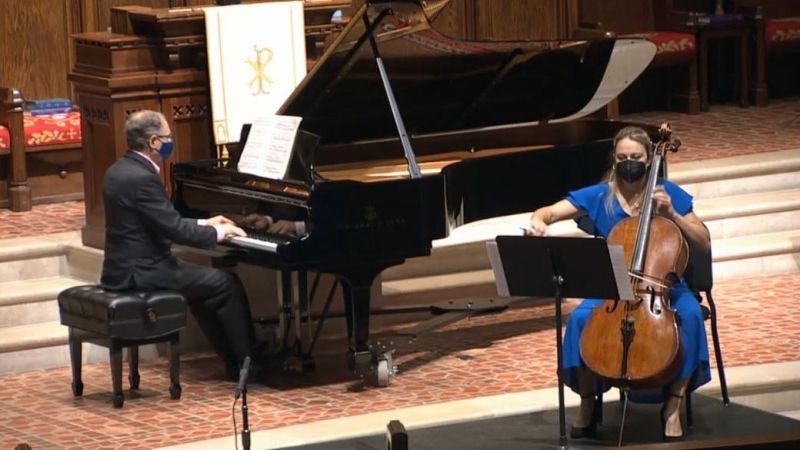 
Here was much of the generally pleasing live camerawork we’ve come to expect over the summer from Concerts@First, with live crossfades between multiple cameras including mostly long and medium shots from different angles, including a very few, rare closeups from behind the performers (see the frame-capture image of Maloney in the slideshow). The audio also felt more “distant” than that of the Vega concert at the Schwartz Center – more like sitting is the back half of the sanctuary rather than the front pews. It started off without enough volume but one could hear it was quickly adjusted up. By the third movement of Kim’s performance of sonata N o. 6, it felt at a more secure and comfortable and appropriate to the visual impression of distance. The Vega performance, by contrast sounded a bit closer to the observer than it looked. The concert at First Presbyterian felt more balanced in that regard, though I would have liked a little more presence and feeling of closeness in the audio — something to which we have become accustomed in media over the years.

The other video I watched Wednesday night was from the Amelia Island Chamber Music Festival in in Florida, featuring The Christiania Trio (violinist David Coucheron, cellist Christopher Rex and pianist Julie Coucheron) performing music of Schumann and Mendelssohn. 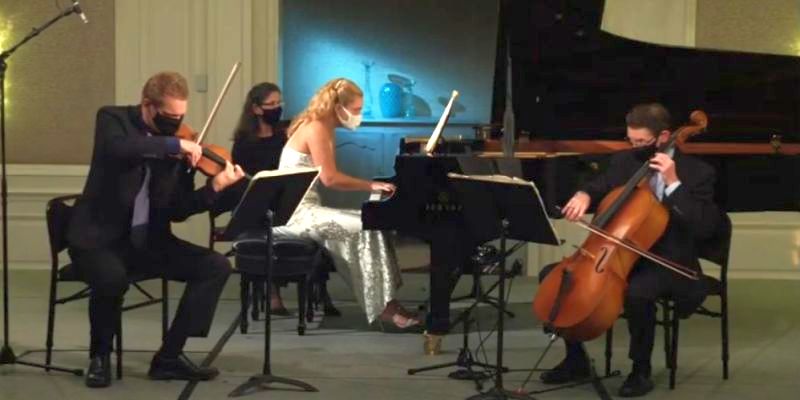 This was a third kind of virtual experience as it was not just capturing a live performance on digital video; it was very much a “produced” product, which was scripted, at least in outline, with a formal introduction and included commentary from the three musicians earlier in the day, offstage in more casual attire, as an intermission of sorts, and a credit trailer, where we learned that this well-made production a the work of Intercoastal Media Group. The concert was performed at the Ritz-Carlton Hotel in front of a small live audience That was never on camera (except for one man at the very end taking a photo with a cell phone), but the applause was real and gave aural clue to the size of the assembled attendees. The video premiere, streamed on Sunday afternoon by Amelia Island TV, is still available for viewing on YouTube.

The Trio opened the musical portion with an arrangement for piano trio of Schumann’s Four Canonic Etudes Op. 56 – the short name for Studies in the Form of Canons for Organ or Pedal Piano, which tells you for what instrument(s) the work was originally intended. After the inserted intermissory chat with the musicians, the video returned to the concert stage for Mendelssohn’s well-known Trio for Violin, Cello, and Piano in D Minor, Op. 49. It also includes some lovely shots to be sen of the Amelia Island area and its shoreline.

Once again the audio-visual experience was different. One had the feeling of almost being in the middle of the musicians, with the excellent, full-bodied close-mic audio combined with video that made use of closeups of the musicians’ faces and hands — so one could clearly see the technique, especially details of Julie Coucheron’s rapid right hand figurations, most notably in the final movement of the Mendelssohn. Among the three, this video was a particular joy to watch. And even with differences in sonic landscape — far, middle or close — all of the three performances were, musically speaking, a delight to hear.  ■ 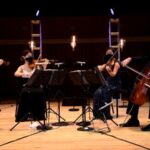 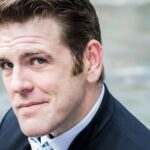 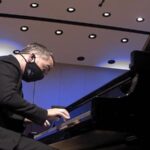 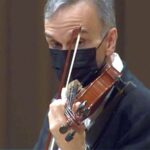 A conversation with violinist Gil Shaham: from isolation to concertizing • 15 Oct 2020