This past Friday, the most recent “Cooke Noontime Series” concert from Emory Chamber Music Society of Atlanta was live-streamed from what has in past months become a familiar location for such concerts: First Presbyterian Church of Atlanta. The co-production with Concerts@First featured violinist Amy Schwartz Moretti, cellist Khari Joyner, and pianist William Ransom. It was another episode of ECMSA’s mission to finish presenting the complete cycle of Beethoven’s violin and cello sonatas before the end of the 2020 calendar year in celebration of the 250th anniversary of the composer’ birth year, along with the complete cycle of string quartets and piano sonatas.

What was unfamiliar, and unexpected for this viewer, was the location within the church where the musicians performed: the front left corner of the sanctuary, next to a pair of exit doors, rather than from the raised chancel where the altar normally resides, which is located front and center.

The simple explanation is that it is a bit of a big move to put the new Steinway D concert grand piano up even two steps onto the thrust platform at the front of the chancel where the altar table normally resides. As the church’s Director of Worship and the Arts/Organist, Jens Korndoerfer, explains, “It is not good for the piano (and the floor) to be moved up and down the ramp too often, so we are exploring different options for placement.”

That makes perfect sense in that respect and the piano’s location seems quite functional for church services, although being in the corner doesn’t make as much sense for a concert where there is an in-person audience. The previous piano at First Presbyetrian had been known to be used in concerts on the floor of the sanctuary, in front of the raised chancel area, rather than on it. Nevertheless, there was no live audience, so performing in the corner worked more or less for this live-streamed only performance.

It did pose an interesting challenge for the videography, which was successfully solved, for the most part. It also proved that an excellent live-stream video need not be made in an exceptionally large area, even if tghe limited performance space is part of a much bigger room.

Moretti and Ransom opened the hour-long concert with Beethoven’s joyous Violin Sonata No. 8, Op. 30, No. 3, then Joyner joined Ransom for the second part in performing the composer’s ebullient Seven Variations on on “Bei Männern” (a happy tune from Mozart’s opera, The Magic Flute) and his short, almost enigmatic Cello Sonata No. 4, Op. 102, No. 1. All of the performances were excellent, the audio was good and the video addressed the limitations of the obligatory performance space — for the most part.

Two primary camera angles captured the musicians in performance, each angle represented by the two photos allied to this article. Camera One, let’s call it, was aimed forward in the direction of the exit doors, toward the keyboard side of the piano. Camera Two, aimed at the side of the piano, and the side of the sanctuary, the view of the musicians which is normal for in-person audiences in center seats. A third camera. There were also shots of Ransom introducing the concert and the respective works from the pulpit.

The sole problem with this setup has to do more than anything with where musicians are accustomed to sitting or standing. From the view of Camera One with the Violin Sonata, we could see only the backs of the performers, which also meant that Moretti’s violin was also obscured from that angle. Camera Two, however, captured not only the performers’ faces and full view of Moretti’s violin work, the piano keyboard and Ransom’s hands could be seem to some degree, at least from the wrists to the knuckles, so we got some visual impression of his playing.

Reflecting upon that, I wondered whether, had Moretti had changed her standing position relative to the piano and faced mostly the other direction, would that have solved the Camera One angle problem? Possibly. But might it have not been quite as good for Camera Two? Maybe, maybe not. It would have solved the Camera One problem to not necessarily stand where a violinist is accustomed to standing in solo recital. Exploration of alternative relationships between the on-stage positions of violinist and pianist is worth exploring.

In contrast, facing Camera One worked very well for Joyner, although a cellist will typically find themselves in that seating position in a trio anyway. As with Moretti, the Camera Two perspective was excellent. In these video-only times, perhaps instrumentalists need to be able to perform facing in almost any location and direction when odd staging restrictions limit their usual position relative to the piano. Ultimately, it comes down to the listening, for most audiences, but these are video streams, not just audio streams or radio broadcasts, and that’s the current rage in terms of presentation medium, so naturally a great deal of attention is given in this review to that aspect of this concert’s presentation (as has been the case with similar recent reviews). La révolution du jour, as it were, is one of being televised — like it or not.

The larger question that comes from this is: How does available space impact how a concert is presented, and perceived, and not just where the musicians stand or sit? This isn’t just a question for video only; it also applies to in-person performances in alternative spaces. That, in addition to use of video, will become increasingly important to performers as they are obliged to reach out father into the community to find and meet their audiences, rather than the audiences coming to them.  ■ 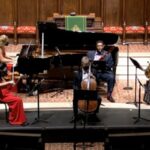 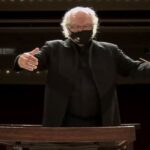