A Warm Day in Winter features composer Truman Harris (b. 1945), who is also a bassoonist. He retired as Assistant Principal Bassoonist of the National Symphony Orchestra in September of 2017. Mr Harris does himself play on both of the works for woodwind quintet, and all of the music on the CD demonstrates the artistic advantages of a composer who is also an active performer who “eats his own cooking.” 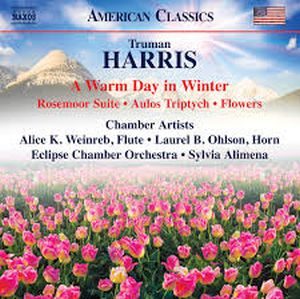 The roster for the recording is filled out by wind players of the NSO and Canadian pianist Audrey Andrist, a Juilliard graduate who teaches at both the University of Maryland and the Washington Conservatory. The performances are indeed warmly musical and artistically assured throughout.

The entire program is graced by a winsome ease of manner, is always engaging, and benefits from a composer whose orchestral experience enables him to write for all the instruments with idiomatic confidence. All of the music is grateful to the players.

The Rosemoor Suite and Flowers are both fine additions to the woodwind quintet repertory. The latter includes a movement which is the first music in my own experience to celebrate the infamously invasive kudzu (including rather heroic figures in the horn, make of that horticulturally what you will.)

The two works with piano are for the least usual combinations on the album: the Sonata for Two Bassoons and Piano, and Aulos Triptych (four flutes and piano). Contrary to the bassoon’s reputation as the “clown” of the orchestra (think The Sorceror’s Apprentice, with or without Mickey Mouse) the Sonata ranges from a kind of Hindemithian focus in “Until Three” to the tender lyricism of “Moon in the Water.” The final movement is indeed a playful Rondo but with no sacrifice of dignity.

Not surprisingly, though, the standout pieces on the CD are the two Concertinos, for horn (featuring Laurel Bennert Ohlson) and flute (Alice Kogan Weinreb) and accompanied by the Eclipse Chamber Orchestra, based in Alexandria, Virginia, under the direction of Sylvia Alimena.

The writing for the soloist in the outer movements of the Horn Concertino is vigorously athletic without strain, and among much fine writing else, the second movement (Arias and Recitatives) has exquisite oboe/horn duet. The composer calls the concluding Rondo “a romp for the horn soloist” it is at once exactly the sort of lively conclusion apt to the genre (opening with a bumptious clarinet/horn duet) and fresh in expression.

Likewise, the opening Allegro of the Flute Concertino is by turns vigorous and purposeful, sprightly and fay. In the middle section of the Andante, the flute trades off with solos emerging from the ensemble. One of my favorite colors on the entire album is the three solo violas playing a variation prior to the retransition in the Rondo finale. ■

Karl Henning is a composer, clarinetist and writer based in Boston, Massachusetts. Henning has also written reviews for MusicWeb International, BerkshireLinks.com and good-music-guide.com.

Support for this article comes in part from generous donations to a GoFundMe initiative on behalf of EarRelevant. Show your support for in-depth classical music journalism from this Atlanta-based publication by by making your donation online through GoFundMe.
SEARCH

Any cookies that may not be particularly necessary for the website to function and is used specifically to collect user personal data via analytics, ads, other embedded contents are termed as non-necessary cookies. It is mandatory to procure user consent prior to running these cookies on your website.