Britain’s Riot Ensemble is no stranger to new music: the instrumental/vocal chamber group has premiered more than 200 new works since 2012, by composers from more than 30 countries. The 14-member ensemble (including conductor/composer Aaron Holloway-Nahum) displays its versatility and interpretive finesse in this new recording of songs and song cycles from four composers – three of them born in the 1980s. 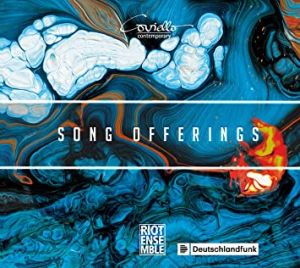 The title of this venturesome and accomplished disc comes from a set of 103 poems, “Song Offerings,” by the Bengali poet Rabindranath Tagore (1861-1941). Composer Jonathan Harvey (1939-2012) selected and set four of Tagore’s poems on the subjects of love and death, all of them sung here with exquisite subtlety by soprano Sarah Dacey.

Dacey’s airy flexibility also is amply evident in the first song on this recording – a setting of e.e. cummings’ “How Many Moments Must.” The soprano line (unaccompanied) is just as spare and quirky as the 14-line sonnet text, which isn’t printed in the program book because it is “still in copyright.” The composer, Samantha Fernando, also wrote the text for “Utterance,” a short piece that gives the soprano more scope, alongside a wide-ranging cello accompaniment: It’s a brief burst of declamatory music that ranges from whispers to excursions well below the staff.

“Plane Sailing” (by the ensemble’s conductor, Holloway-Nahum) gives its interpreters some heroic challenges, including high-flying excursions with an extended high D for the soloist (managed somewhat effortfully by Dacey, who is otherwise excellent). In its more reflective moments, the piece illuminates the text with increasingly muted and translucent references to “mirages” and “the one passing/Of pale day into paler night.”

Dacey is joined by soprano April Frederick for Laurence Osborn’s “Micrographia,” a set of six short songs based on 17th-century scientist/philosopher Robert Hooke’s interpretations of what he saw through the newly invented microscope. It’s an intriguing premise, and the songs (in which the two sopranos circle and echo and comment on what Hooke sees) are descriptive and, for the most part, effective. The first five movements comment in amazement on what Hooke is seeing through the lens (“Needle,” “Salt,” “Urine,” “Blue Mould,” and “Wings of Flies,” the last of which includes some witty buzzing from the accompanying kazoo players, who sound like they’re having enviable fun). The sixth movement, “Of Multitudes of Small Stars,” shifts the focus skyward in a rhapsodic contemplation of “…more radiant/straining to rise/shy stars.”

The stars may indeed be straining, but sometimes (not only here, but elsewhere on this recording) the singers are straining, too. This leads one to an often-expressed wish that composers of lieder (or art songs, or whatever most accurately describes the genre) did not always salt their scores so liberally with notes that push the singers near the very top of their ranges. For sopranos, the notes above the staff – particularly far above the staff – often lead to a sound production that sacrifices tonal beauty for pitch achievement. Further, the text on which the songs are based is often completely lost, sacrificed as the singers must concentrate wholly on the vocal apparatus required for the high notes.

Fernando’s “The Half Moon” avoids this issue in a beautifully placed and lyrical meditation on the Christina Rossetti poem of the title.

The disc’s final four tracks are devoted to the title work, Jonathan Harvey’s “Song Offerings,” an ingenious set of songs scored so richly that it’s hard to believe this is a relatively small chamber ensemble. In some sections, the music’s pitch center sometimes seems to wax and wane; the notes rise and spread and take on new forms, and the scoring sounds consistently inventive. The final song (“O thou the last fulfillment of life, Death, my death, come and whisper to me!”) is all angular lines, punctuated by bells that appear to announce Death’s arrival. Spoken text has an incantatory power; angular, octave-skipping extended melody shows Dacey, the soloist/narrator, preparing to “meet her lord alone in the solitude of night.” It’s a powerful performance.  ■

Melinda Bargreen is a Seattle-based composer and music journalist who has been writing for the Seattle Times and other publications for four decades. Her 2015 book, Classical Seattle is published by University of Washington Press. Her 50 Years of Seattle Opera was published by Marquand Books in 2014. 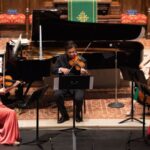 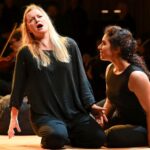 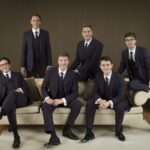 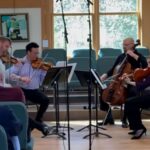 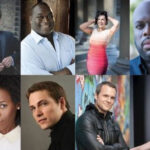